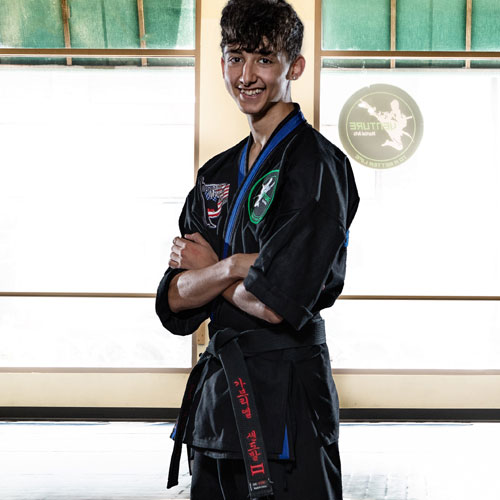 Mr. Gabriel Sandoval is 18 years old and grew up in North Glen/Commerce City. He began training in Martial Arts when he was 10 years old. His parents wanted to reinforce the life skills that they were teaching him at home, such as discipline and respect. Even before he earned his Black Belt he knew he wanted to be an instructor. When he received his Black Belt he saw the way it impacted him and his fellow students and he wants to help other people in the same way.

When he was young he learned to focus and stay disciplined through Martial Arts training and that helped him mature more quickly than other people his age. He enjoys working with kids to give them the skills that they need to succeed in life. His favorite part of taekwondo is sparring- the fast-paced competition is one of the first things he wanted to do in the sport. He brings that competitive nature to each class he teaches. He is always growing and constantly learning each day. He wants his students to continue setting new goals and keep moving past those goals toward a brighter future.

Gabriel hopes to own his own taekwondo school someday. He knows there is always something new to learn and new ways to grow in taekwondo. He wants to be able to pass that knowledge and passion along to his own team in the future, the way that the Venture team taught him. He wants to continue to grow past where he is right now and earn his fourth degree. The family and team feeling he gets from teaching and training at Venture brings him back every day and keeps him wanting more.

Gabriel Sandoval is a third-degree Black Belt and the Head Instructor of Venture Martial Arts in Flatirons.