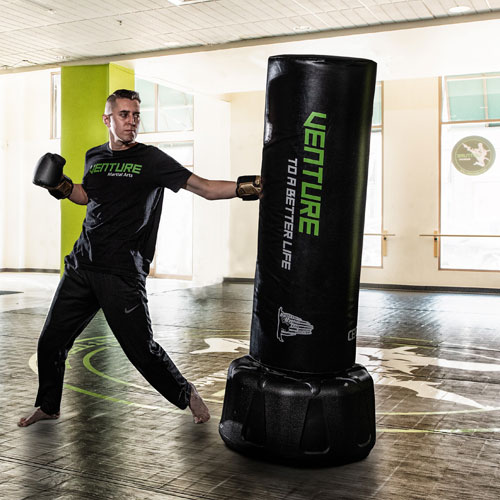 Sean Miller has been training in Martial Arts since he was twelve. Born and Denver and raised out of state, he is grateful to call Central Park his true home- mostly because he is part of the Venture team. He has practiced several different types of Martial Arts throughout his career but has found his passion in teaching at Venture Martial Arts. Having trained in the military, he understands the importance of discipline. He imparts that knowledge to his students during every lesson.

Miller began his instructor journey at age 19 when he was working security and was attacked without warning. From that moment he was inspired to learn the best forms of Martial Arts so that he could always protect himself and those around him. He wants everyone to learn to defend themselves so that they can feel safe no matter what situation is presented. He thinks that fear can either hold you back or push you forward, and in the moment of fight or flight he chooses to fight.

As an instructor he loves seeing the students growing from where they started, maybe feeling lost or frustrated, to finally grasping a concept and making it their own form of art. It’s theirs, they built it, and it shows in their pride and development. He believes that taekwondo is a never-ending process. Every time you fall you strive to get better. Even when achieving a Black Belt, it’s never the end, it’s only the beginning. He hopes that his students and Venture as a whole will be known worldwide and be able to share their gifts on an international level.